This item is an 7" X 9",black and white photo of Sharon Stone in the 1986 ABC TV Movie-"Mr. & Mrs. Ryan". The photo has an original typed, dated byline on ABC stationery explaining the photo and giving date and time of broadcast.A cool blonde who combined brainy sex appeal and old-fashioned Hollywood glamour, Sharon Stone was one of Hollywood's biggest stars of the 1990s. She was a Ford Agency model in the late 1970s and then turned to acting, beginning with B-list movies like King Solomon's Mines (1985, with Richard Chamberlain) and Police Academy 4 (1987). Her brazen role as a sultry killer in the 1992 film Basic Instinct made her a star. (The movie's interrogation scene, with Stone uncrossing and crossing her legs seductively in front of co-star Michael Douglas, became an iconic Hollywood moment.) Her newfound star power put her in position to produce and star in the western The Quick and the Dead (1995, directed by Sam Raimi and also starring Leonardo DiCaprio), and for her role in Martin Scorsese's crime film Casino (1995, co-starring Robert DeNiro) she was nominated for an Oscar. Since then her starring roles have been few and far between while she spends time raising two adopted children. Her other films include Sphere (1998, with Dustin Hoffman), the remake Gloria (1999, with Stone in the Gena Rowlands role) and Broken Flowers (2005, with Bill Murray). She reprised her role as the seductive Catherine Tramell in the 2006 sequel Basic Instinct 2, and had smaller roles in Bobby (2006, with Demi Moore and Alpha Dog (2006, with Justin Timberlake.The photo has been autographed on the front by Sharon Stone..............CONDITION OF PHOTO,AUTOGRAPH AND BYLINE ARE EXCELLENT................. 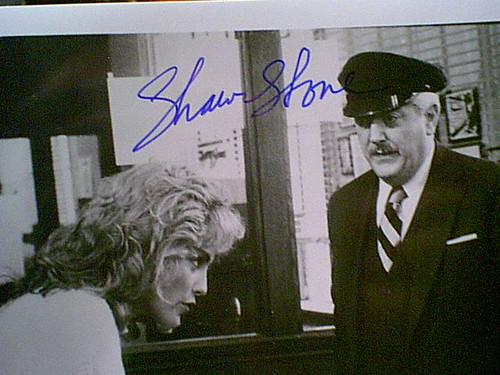