This item is an 8" X 10",black and white photo of actor Robert Stack in a scene from "The Untouchables" television series.The Untouchables is an American crime drama that ran from 1959 to 1963 on ABC. Based on the memoir of the same name by Eliot Ness and Oscar Fraley, it fictionalized the experiences of Eliot Ness, a real-life Prohibition agent, as he fought crime in Chicago during the 1930s with the help of a special team of agents handpicked for their courage and incorruptibility, nicknamed the Untouchables.The stories often revolved around Ness' enmity with the criminal empire of Chicago mob boss Al Capone, and many focused on crimes related to Prohibition. The show stars Robert Stack as Eliot Ness and was narrated by Walter Winchell. Neville Brand played Al Capone in The Desilu Playhouse episodes, and in a few episodes of the regular series. The show drew harsh criticism from some Italian-Americans including Frank Sinatra, who felt it promoted negative stereotypes of them as mobsters and gangsters. The Capone family sued the show for $1,000,000 for its unauthorized use of Al Capone's likeness for a profit.The photo has been autographed on the front by Robert Stack...........BOTH PHOTO AND AUTOGRAPH ARE IN VERY GOOD CONDITION. 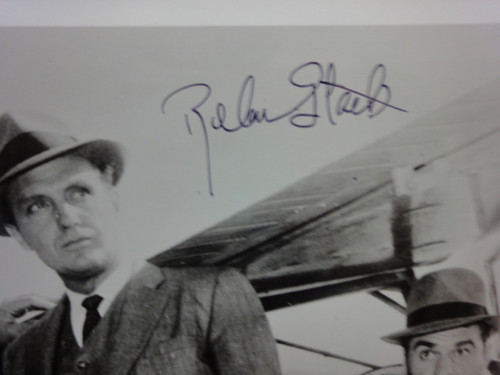