Skip Martin & His Prohibitionists(Somerset 12900)-"The Untouchables"-LP. This vintage LP features songs and sounds from the era of "The Untouchables".Some tracks include Untouchables Theme,Black Bottom,Poor Little Ma Barker,Chicago,Valentines Day Massacre plus more.An outgrowth of a two-part dramatization on the CBS anthology Desilu Playhouse, The Untouchables was inarguably one of the most violent cop series ever seen on American network television. It was also one of the most popular, so draw your own conclusions! The series was based on the autobiography of Eliot Ness, a lifelong law enforcement officer and civil servant, and former treasury-department agent. While assigned to Chicago in the early 1930s, Ness and a small band of dedicated, incorruptible fellow agentsnicknamed "The Untouchables" by the press because of the fact that they could be neither bought off nor scared offwere instrumental in crushing the criminal empire of notorious gangland chieftan Al Capone. Though Ness spent much of the rest of his career in other cities, notably Cleveland, his Chicago years were, understandably, the focus of the series, which debuted October 15, 1959 on ABC. Winning the role of Ness over such candidates as Van Johnson, Van Heflin and Fred MacMurray, Robert Stack brought to the character just the right amount of tough, gimlet-eyed diligence, resisting the tempation to leaven the character with even a trace of humor or sentimentat least during the first few seasons. Stack was seen in the two-part pilot (later released theatrically as The Scarface Mob) opposite Keenan Wynn as a fellow "Untouchable" and Neville Brand as scarfaced Al Capone. The LP has been autographed on the front cover by Robert Stack.......CONDITION OF VINYL IS USED.CONDITION OF COVER AND AUTOGRAPH IS VG................. 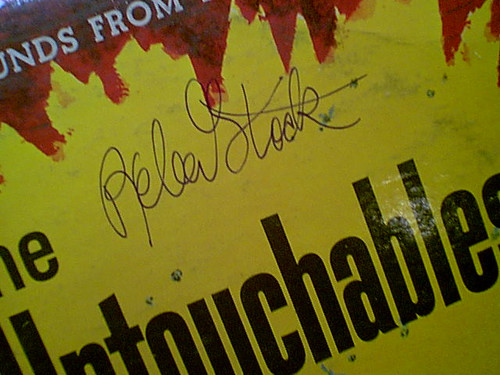