The Philadelphia Inquirer TV Week-September 19, 1971-magazine. This magazine of tv listings features a color cover photo of Jimmy Stewart plus an article with photos.James (Jimmy) Stewart started in the movies in the 1930s, making his mark in studio-driven light comedies as a wide-eyed innocent. He earned an Oscar nomination for his defining role in Mr. Smith Goes To Washington, (1939) and the next year he won an Oscar for The Philadelphia Story (co-starring Cary Grant and Katharine Hepburn). Stewart's movie career (he also performed frequently on radio) was interrupted by World War II, in which he served as a combat pilot. He returned from the war with a distinguished record, and soon starred in It's A Wonderful Life, (1946) again earning an Oscar nomination. He appeared in dozens of westerns, including Destry Rides Again, (1939) and Winchester '73 (1950), and made notable appearances in Alfred Hitchcock's Rope (1948), Rear Window (1954) and Vertigo (1958).By the end of the war, Stewart was a colonel. In 1959 he was promoted in the Air Force Reserves to the rank of brigadier general... Late in life Stewart made a series of popular appearances on Johnny Carson's Tonight Show, reading his own sentimental poetry.The TV Week has been autographed on the front by Jimmy Stewart...BOTH TV WEEK AND AUTOGRAPH ARE IN VERY GOOD CONDITION...................... 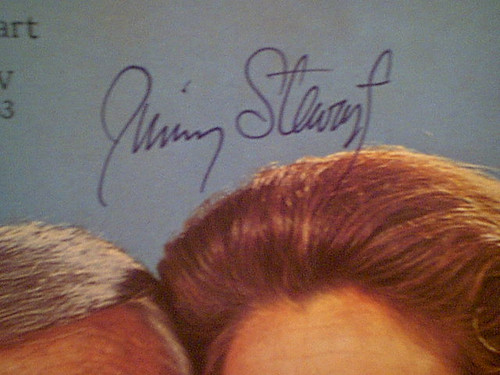