This item is an 8" X 8",color lithograph candid photo of actor Jimmy Stewart. The color lithograph photo has been mounted on an 8" X 8" piece of photography paper.James Maitland Stewart (May 20, 1908  July 2, 1997), popularly known as Jimmy Stewart, was an American film and stage actor best known for his self-effacing persona. Over the course of his career, he starred in many films widely considered classics and was nominated for five Academy Awards, winning one in competition and one Lifetime Achievement award. He was a major MGM contract star. He also had a noted military career, rising to the rank of Brigadier General in the United States Air Force Reserve. Throughout his seven decades in Hollywood, Stewart cultivated a versatile career and recognized screen image in such classics as Mr. Smith Goes to Washington, The Philadelphia Story, Harvey, It's a Wonderful Life, Rear Window, Rope and Vertigo. He is the most represented leading actor on the AFI's 100 Years... 100 Movies (10th Anniversary Edition) and AFI's 10 Top 10 lists. He is also the most represented leading actor on the 100 Greatest Movies of All Time list presented by Entertainment Weekly. As of 2007, 10 of his films have been inducted into the United States National Film Registry.Stewart left his mark on a wide range of film genres, including westerns, suspense thrillers, family films, biographies and screwball comedies. He worked for a number of renowned directors later in his career, most notably Alfred Hitchcock, John Ford, Billy Wilder, Frank Capra, George Cukor, and Anthony Mann. He won many of the industry's highest honors and earned Lifetime Achievement awards from every major film organization. He died in 1997, leaving behind a legacy of classic performances, and is considered one of the finest actors of the "Golden Age of Hollywood." He was named the third Greatest Male Star of All Time by the American Film Institute. The photo has been autographed on the front by Jimmy Stewart.......BOTH PHOTO AND AUTOGRAPH ARE IN VERY GOOD CONDITION........... 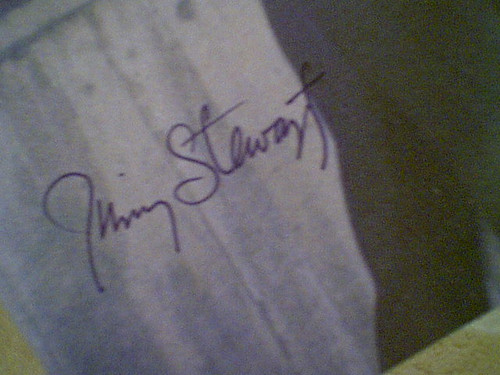