This item is an 8" X 10",black and white photo of Jimmy Stewart in a scene from the 1973 MGM Movie-"Hawkins On Murder".Also known as Death and the Maiden, Hawkins on Murder introduced Jimmy Stewart to the TV-detective genre as folksy sleuth Billy Jim Hawkins (this TV movie was produced by MGM, the studio which gave Stewart his start in the 1930s). Hawkins travels from his West Virginia hometown to investigate a triple murder in Los Angeles. Along for the ride is Strother Martin as Hawkins' somewhat slow cousin/assistant, who would continue in this role when the Hawkins series premiered on a regular basis in the fall of 1973. The Harold Lloyd estate in Beverly Hills provided some of the more lavish backgrounds for this rambling mystery yarn. On the whole, Hawkins on Murder is better than the series that followed, which fell prey to banality and repetition early on.The photo has been autographed on the front by Jimmy Stewart................BOTH PHOTO AND AUTOGRAPH ARE IN EXCELLENT CONDITION......... 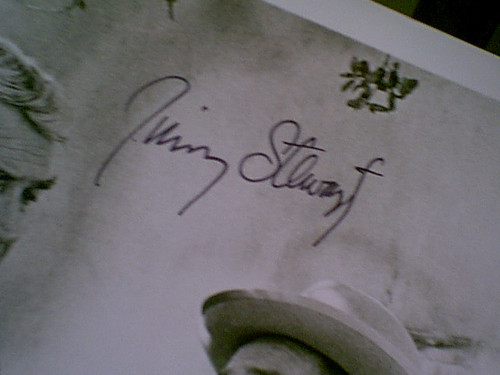