Isaac Stern(Columbia Masterworks 5379)- "Tchaikovsky"/"Mendelssohn"-Violin Concertos-LP. Stern, Isaac, 1920–2001, American violinist, b. Kremenets, in what is now Ukraine. Brought to the United States as an infant, Stern began piano lessons at the age of six and violin lessons at eight. He studied at the San Francisco Conservatory and made his debut at 11 with the San Francisco Symphony Orchestra. After his New York debut in 1937 at Town Hall, Stern made extensive and brilliantly successful world tours. He was particularly noted for his warm, rich tone in a repertoire that ranged from the Baroque to the Romantic and the modern. He recorded widely and was an active and enthusiastic teacher, known for his spirited encouragement of young musicians. In 1960 he led a successful campaign to save Carnegie Hall, the great New York City performance space, which was threatened with demolition. He subsequently served as president of the hall, a position he held until his death. Stern is considered one of the 20th cent.'s leading virtuosos.The LP has been autographed on the back cover by Isaac Stern............CONDITION OF VINYL,COVER AND AUTOGRAPH IS VG PLUS................. 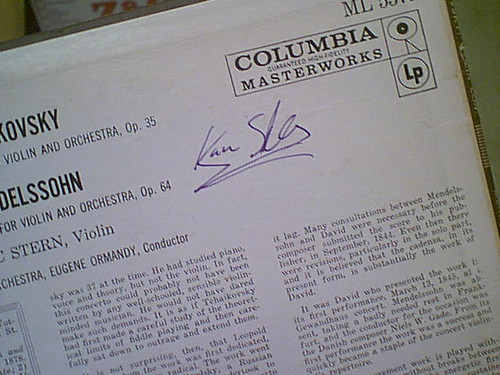