This item is an 8" X 10",black and white photo of veteran actor Harry Dean Stanton.A perpetually haggard character actor with hound-dog eyes and the rare ability to alternate between menace and earnest at a moment's notice, Harry Dean Stanton has proven one of the most enduring and endearing actors of his generation. From his early days riding the range in Gunsmoke and Rawhide to a poignant turn in David Lynch's uncharacteristically sentimental drama The Straight Story, Stanton can always be counted on to turn in a memorable performance no matter how small the role. A West Irvine, KY, native who served in World War II before returning stateside to attend the University of Kentucky, it was while appearing in a college production of Pygmalion that Stanton first began to realize his love for acting. Dropping out of school three years later to move to California and train at the Pasadena Playhouse, Stanton found himself in good company while training alongside such future greats as Gene Hackman and Robert Duvall. A stateside tour with the American Male Chorus and a stint in New York children's theater found Stanton continuing to hone his skills, and after packing his bags for Hollywood shortly thereafter, numerous television roles were quick to follow. The photo has been autographed on the front by Harry Dean Stanton..............BOTH PHOTO AND AUTOGRAPH ARE IN VERY GOOD CONDITION............ 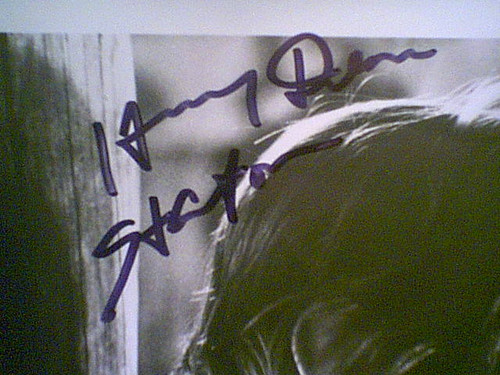