Gertrude Stein-"The Autobiography Of Alice B. Toklas"-1933-Literary Guild-5 1/2" X 8 1/2"-311 pages-Hardcover Book-With Photos-First Edition-Signed By Author.Gertrude Stein was an American writer known for her role in the experimental arts and letters of Europe in the early part of the 20th century. She traveled in Paris, Vienna and San Francisco as a child, studied philosophy with William James at Radcliffe College and medicine at John Hopkins University. She moved to France in 1904 and found herself in the center of a crowd of artists that included Pablo Picasso, Ernest Hemingway and Henri Matisse. Stein's prose is often compared to the abstract paintings of the time, daring and, at times, nearly incomprehensible. Although Stein had been writing plays, prose and poetry for years, she was unknown to most readers until the 1933 publication of The Autobiography of Alice B. Toklas, named after her companion of many years. Her other books include Three Lives (1908), Tender Buttons (1914) and The Making of Americans (1925).A hand signed cut signature by Gertrude Stein with a fountain pen in blue has been affixed to the title page of the book. The cut signature portion is approximately 1" X 2"............BOTH BOOK AND AUTOGRAPH ARE IN VERY GOOD CONDITION. 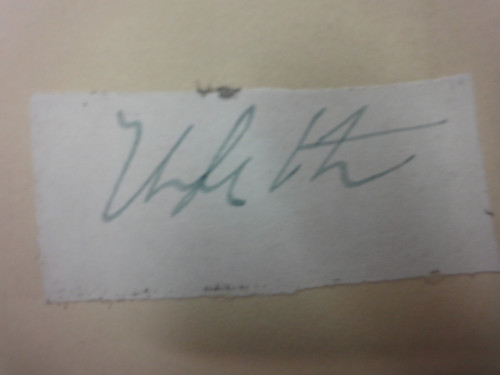