This item is a 6.5" X 9.5" page from a Cosmopolitan Magazine-Volume 43 No. 1 May 1907. PLEASE NOTE-this is NOT the complete magazine. The magazine page features a black and white photo by photographer Edward Steichen.Edward SteichenSteichen, Edward, 18791973, American photographer, b. Luxembourg, reared in Hancock, Mich. Steichen is credited with the transformation of photography into an art form. At 16, while apprenticed as a lithographer, he taught himself photography and painted in his spare time. Studying art in Paris, he sought painterly effects in his photography, becoming an enormously successful portrait photographer. In New York City he was associated with Alfred Stieglitz in the founding of the "291" and Photo-Secession galleries. At "291" he brought works by Cézanne, Rodin, Picasso, and Matisse to American attention. Back in Paris, Steichen made botanical experiments, a lifelong passion; he was later to win added renown as a crossbreeder of flowers. During World War I Steichen was instrumental in the development of aerial photography. Fascinated by the technical potential of the medium, he produced pictures remarkable for their clarity, detail, and expressive use of light. From 1923 to 1938 he worked as a portrait and fashion photographer for Condé Nast publications and opened a commercial studio. At this time he made superb photomurals, including those of the George Washington Bridge. During World War II, he was placed in command of naval combat photography.Steichen was later director of the department of photography of the Museum of Modern Art (194762). In this capacity he organized the Family of Man exhibition (1955) to "mirror the essential oneness of mankind"; it is considered the greatest photographic exposition ever mounted. During his time at the museum, Steichen had virtually abandoned his own work; but in his last years he filmed the effect of the passing seasons on a flowering shadblow tree. Steichen's creative imagination and his extraordinarily powerful imagery forged for him and for his medium an honored place among the fine arts.A hand signed cut signature by Edward Steichen with a fountain pen in black is affixed to the front. The cut signature portion is approximately 1" X 2"...............BOTH PHOTO AND AUTOGRAPH ARE IN VERY GOOD CONDITION. 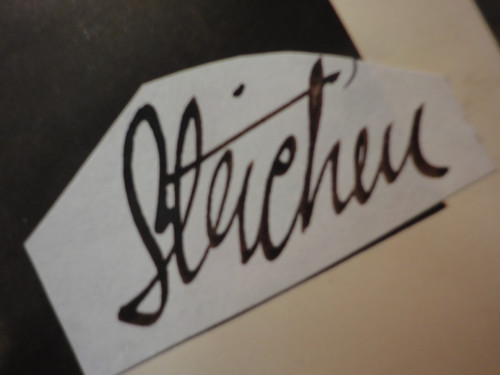