Creem Magazine-April 1981-66 pages. This vintage Rock Magazine-features a color cover of Sting plus an article with photos.After disbanding the Police at the peak of their popularity in 1984, Sting quickly established himself as a viable solo artist, one obsessed with expanding the boundaries of pop music. Sting incorporated heavy elements of jazz, classical, and worldbeat into his music, writing lyrics that were literate and self-consciously meaningful, and he was never afraid to emphasize this fact in the press. For such unabashed ambition, he was equally loved and reviled, with supporters believing that he was at the forefront of literate, intelligent rock and his critics finding his entire body of work pompous. Either way, Sting remained one of pop's biggest superstars for the first ten years of his solo career, before his record sales began to slip.The Creem magazine has been autographed on the front cover by Sting................BOTH MAGAZINE AND AUTOGRAPH ARE IN VERY GOOD CONDITION.............. 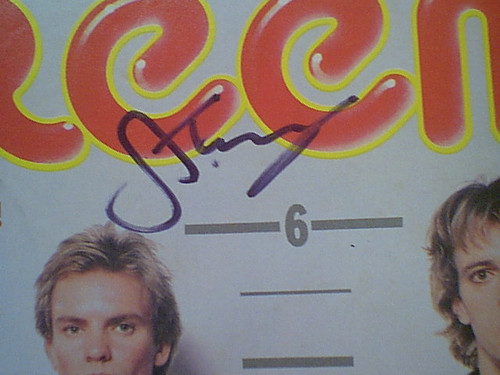