THIS IS AN AUTHENTICALLY AUTOGRAPHED LP BY CRAIG STEVENS.. JAZZ FROM PETER GUNN-THE JOE WILDER QUARTET(COLUMBIA CL 1319)MUSIC BY HENRY MANCINI-FROM THE TV SERIES "PETER GUNN" FEATURING CRAIG STEVENS AND LOLA ALBRIGHT-FRONT PHOTO COVER IS SIGNED BY CRAIG STEVENS. Born Gail Shikles, Jr. in Liberty, Missouri, he studied dentistry at the University of Kansas but acting with the university's drama club saw him give up on his studies to try to make it in the Hollywood film industry. Adopting the stage name Craig Stevens, he debuted in a small role in 1939 and thereafter played mainly secondary parts. In 1944, he married Canadian actress Alexis Smith to whom he was married for almost fifty years until her passing in 1993. After nearly twenty years in film, in 1958 Craig Stevens gained national prominence for his starring role as the "super-cool" private detective in the trend-setting television series Peter Gunn. The series was produced by Blake Edwards, who also wrote and directed many of the episodes. The theme music for the series was composed by Henry Mancini and helped establish his early fame. Stevens was called on by Sir Lew Grade of ITV to move to London to play the lead role in a made for TV series called Man of the World in the early 60's. Stevens died in 2000 in Los Angeles, California from cancer at the age of 81. CONDITION OF THE VINYL,COVER, AND AUTOGRAPH IS VG. 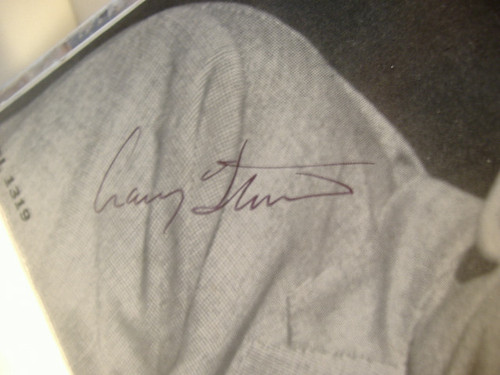