Photoplay Magazine-April 1961-92 pages. This vintage Photoplay Magazine-which originally sold for twenty five cents-features a color cover photo of Connie Stevens plus an article with photos.Connie Stevens (born August 8, 1938) is an American actress and singer, best known for her roles in the television series Hawaiian Eye and Maverick.She played 'Cricket Blake' in the popular television detective series Hawaiian Eye from 1959 to 1962, a role that made her famous. Her principal costar was Robert Conrad. In a televised interview on August 26, 2003, on CNN's Larry King Live, Stevens recounted that while on the set of Hawaiian Eye she was told she had a telephone call from Elvis Presley. She didn't believe it, but in fact it was Elvis, who invited her to a party and said that he would come to her house and pick her up personally. They dated for a time and she says they remained friends until Presley's death.Her first album was titled Concetta (1958). She had minor single hits with the standards "Blame It On My Youth" (music by Oscar Levant and lyrics by Edward Heyman), "Looking For A Boy" (music by George Gershwin and lyrics by Ira Gershwin), and "Spring Is Here" (music by Richard Rodgers and lyrics by Lorenz Hart). She appeared opposite James Garner in a comedy episode of the TV Western series Maverick entitled "Two Tickets to Ten Strike," and after making several appearances on the Warner Bros. hit TV series 77 Sunset Strip, she recorded the hit novelty song "Kookie, Kookie, Lend Me Your Comb" (1959), a duet with one of the stars of the program, Edward Byrnes, that reached #4 on the Billboard Hot 100. She also had hit singles as a solo artist with "Sixteen Reasons" (1960), her biggest hit, reaching #3 on the Billboard Hot 100, and a minor #71 hit "Too Young to Go Steady" (1960) (music by Jimmy McHugh and lyrics by Harold Adamson). Other single releases were "Why'd You Wanna Make Me Cry?", "Mr. Songwriter", and "Now That You've Gone".The magazine has been autographed on the front cover by Connie Stevens.............BOTH MAGAZINE AND AUTOGRAPH ARE IN VERY GOOD CONDITION........... 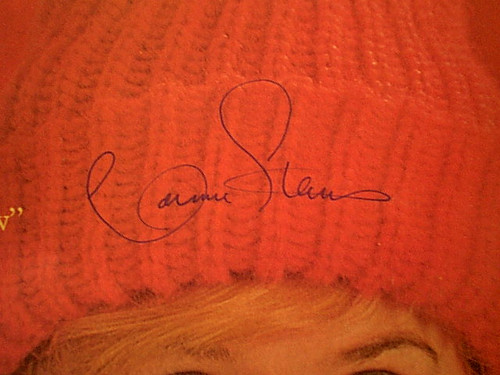