Bram Stoker-"Dracula"-1992-Barnes & Noble-Hardcover Book-With Jacket-Signed By Author.We are cognizant of the fact that this book was published after Bram Stoker's death. THE SIGNATURE CUT PORTION IS OLDER THAN THE BOOK.Abraham (Bram) Stoker wrote the classic 1897 vampire novel Dracula. Raised in a Dublin suburb and educated at Trinity College, Stoker first worked as a civil servant while writing theater reviews and short stories on the side. He left Dublin for London in 1878 to take a position managing the Lyceum Theatre for actor Sir Henry Irving. During his long career at the Lyceum he wrote many fantastic stories and novels, cementing his fame with Dracula. While it wasn't the first vampire story ever written, Stoker's tale made vampires famous, and his creepy Count Dracula became the model for the popular movie Draculas of the 20th century (especially the iconic 1931 version played by Bela Lugosi). Stoker's other books include The Snake's Pass (1890), The Jewel of Seven Stars (1904) and The Lair of the White Worm (1911).A hand signed cut signature by Bram Stoker with a fountain pen in brown has been affixed to the title page of the book.The cut signature portion is approximately 1" X 2 1/2"..............BOTH BOOK AND AUTOGRAPH ARE IN VERY GOOD CONDITION. 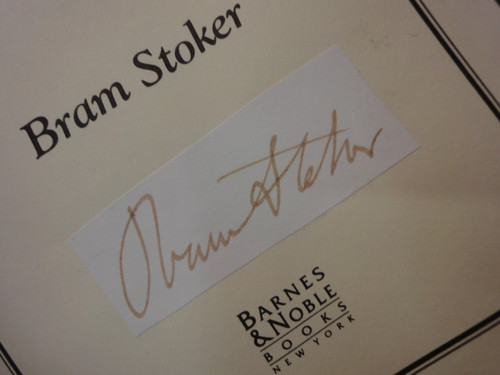