"I Hear A Rhapsody"-1940-Broadcast Music-sheet music. This song is featured in the 1952 RKO Movie-"Clash By Night". The movie stars Barbara Stanwyck and Paul Douglas and they are featured on the front cover of the sheet music in an early photo.The opening credits appearing over a turbulent ocean serve as a foreshadowing of things to come in this standard-issue love triangle that shifts into high drama thanks to taut direction by Fritz Lang and a sizzling performance by Barbara Stanwyck. Returning to live with her brother, Joe (Keith Andes), at her family's home in a small fishing village, Mae Doyle (Stanwyck) has reached rock bottom. Reeling from the pain of her previous romances, Mae slowly pieces things together and begins dating Jerry (Paul Douglas), a simple-minded fisherman. More along Mae's speed is Jerry's slick, boozy pal Earl Pfeiffer (Robert Ryan), a film projectionist who makes his feelings for her known right away despite the fact that he is married. Mae spurns his advances and decides to marry Jerry. Meanwhile, Joe has grown close to ditzy factory worker Peggy (Marilyn Monroe). Some time later, Mae and Jerry have had a baby, and things appear happy, but Mae is not in love with Jerry, and soon finds herself in Earl's arms. Jerry discovers the affair, and during a confrontation with the deceitful couple, Mae reveals that she is leaving to be with Earl. After some booze and a pep talk from his Uncle Vince (J. Carrol Naish), Jerry confronts Earl and proceeds to nearly strangle him until Mae arrives. Jerry storms off, but when Mae comes to their home to retrieve the baby, she discovers that Jerry has taken the child. Desperately upset, she explains the situation to Earl, but as they talk, she begins to arrive at a new realization about her life and what it takes to find happiness.The sheet music has been autographed on the front cover by Barbara Stanwyck and Paul Douglas with fountain pens in blue................BOTH SHEET MUSIC AND AUTOGRAPHS ARE IN VERY GOOD CONDITION.PLEASE NOTE THE AUTOGRAPHS ARE VISIBLE TO THE NAKED EYE-THEY DO NOT SHOW UP WELL IN THE PHOTOS.............. 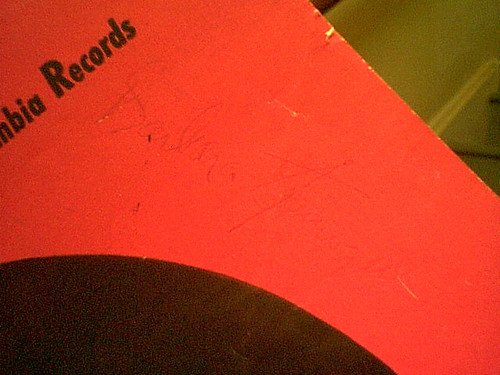