Ringo Starr-"Back Off Boogaloo"-Startling Music-Sheet Music. This vintage sheet music originally sold for $1.00. Ringo Starr played drums with Rory Storm and The Hurricanes from 1959 until 1962, when he replaced Pete Best permanently as a member of The Beatles. Together with John Lennon, George Harrison and Paul McCartney, Ringo became world famous. Musically he was known for steadiness rather than flash, and his jolly, guileless image helped him launch an acting career. After The Beatles broke up, Ringo had a solo recording career, releasing hits such as "It Don't Come Easy" and "Photograph." He also appeared in movies, including The Magic Christian (1969) and 200 Motels (1971). In 1988 he was nominated for an Emmy for his role as Mr. Conductor in the children's television show Shining Time Station. Since 1990 Starr has occasionally performed and recorded with Ringo And The All-Starr Band, which sometimes included his son, Zak Starkey. The sheet music has been autographed on the front cover by Ringo Starr.........BOTH SHEET MUSIC AND AUTOGRAPH ARE IN EXCELLENT CONDITION. 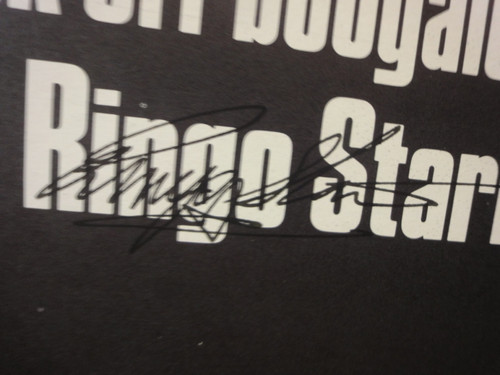