THIS IS AN AUTHENTICALLY AUTOGRAPHED SHEET MUSIC BY RICK SPRINGFIELD.. RICK SPRINGFIELD-WHAT WOULD THE CHILDREN THINK-COMPOSED, WRITTEN AND RECORDED BY RICK SPRINGFIELD-RELEASED IN 1972-PHOTO COVER IS SIGNED BY RICK SPRINGFIELD-CONDITION OF THE SHEET MUSIC AND AUTOGRAPH IS VERY GOOD. Rick Springfield (born Richard Lewis Springthorpe on August 23, 1949 in Sydney) is an Australian-American songwriter, musician and actor. As a musician he is most famous for the 1981 #1 single "Jessie's Girl", which became a Grammy Award-winning landmark of 1980s pop-rock and helped establish the emerging music video age. Also an actor, Springfield's best known role is that of the character Dr. Noah Drake on the daytime drama General Hospital. He originated the character from 1981-1983 and then returned to play him again from 2005 until present. He then appeared on Don't Forget The Lyrics in January 2009 to sing his song "Jessie's Girl" and his new song "What's Victoria's Secret." He stayed until the show was over. On March 19 2009 he plays a gig in support of Voices of Uganda at the Key Club in Los Angeles. The gig is co-organized by fellow General Hospital alum, actress Melissa Fitzgerald. 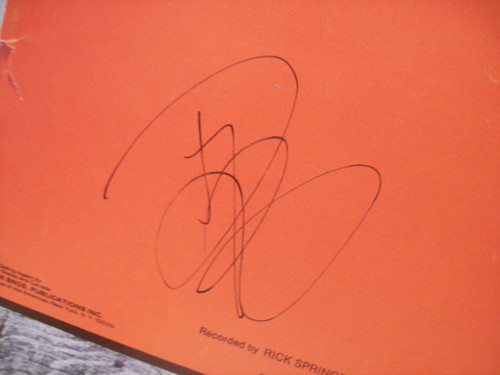