Jerry Springer-"Ringmaster!"-1998-St. Martin's Press-6" X 9"-272 pages-hardcover book-with jacket-with photos-Signed By Author.Jerry Springer is the unflappable host of the lighthearted and tawdry daytime talk show, The Jerry Springer Show. The son of Jewish refugees, Springer was born in England in 1944, but moved to New York City when he was five years old. He was educated at Tulane University and Northwestern University's college of law before jumping into politics as an aide to the 1968 presidential campaign of Robert F. Kennedy. After Kennedy's assassination, Springer joined a law firm in Cincinnati, Ohio. He was elected to Cincinnati's city council in 1971, when he was just 27 years old. He proved to be a popular and idealistic politician, though his rising political career stalled briefly when he was caught having paid a prostitute -- with a personal check. He apologized, resigned, was re-elected to the council, and in 1977 was elected mayor of Cincinnati at the age of 33. Springer served one term, then made an unusual move into local television, serving as commentator and anchor for local station WLWT from 1982-93. The Jerry Springer Show made its debut in 1991 and was originally syndicated as a serious, issues-oriented talk show. It soon morphed into an arena for average-joe guests to air personal confessions and dirty laundry, with Springer playing the role of the calm, bemused moderator. The show became a hit and a staple of daytime and late night syndication. In later years Springer returned to his political roots, publicly toying with the notion of running for office again and serving as a delegate to the 2004 Democratic National Convention. He hosted a syndicated radio show, Springer on the Radio, from 2005-06.The book has been autographed with a dedication on the title page by Jerry Springer.....BOTH BOOK AND AUTOGRAPH ARE IN VERY GOOD CONDITION.BOTTOM OF EACH PAGE HAS CREASING........... 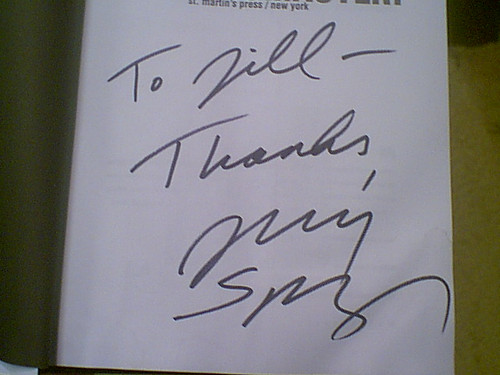