This item is a 5" X 5" color informational card on Soichiro Honda. The card has a color photo of him on the front and his biography on the back. Soichiro Honda (本田 宗一郎, Honda Sōichirō, 17 November 1906 – 5 August 1991) was a Japanese engineer and industrialist. In 1948, he established Honda Motor Co., Ltd. and oversaw its expansion from a wooden shack manufacturing bicycle motors to a multinational automobile and motorcycle manufacturer. In 1937, Honda founded Tōkai Seiki to produce piston rings for Toyota. During World War II, a US B-29 bomber attack destroyed Tōkai Seiki's Yamashita plant in 1944 and the Iwata plant collapsed in the 1945 Mikawa earthquake. After the war, Honda sold the salvageable remains of the company to Toyota for ¥450,000 and used the proceeds to found the Honda Technical Research Institute in October 1946. In 1948 he started producing a complete motorized bicycle, the Type A, which was driven by the first mass-produced engine designed by Honda, and was sold until 1951. The Type D in 1949 was a true motorcycle with a pressed-steel frame designed and produced by Honda and with a 2-stroke, 98 cc (6.0 cu in) 3 hp (2.2 kW) engine, and became the very first model in the Dream series of motorcycles. The Society of Automotive Engineers of Japan [ja] lists both the Type A and the Type D models as two of their 240 Landmarks of Japanese Automotive Technology. After the war, Honda became reacquainted with his friend Takeo Fujisawa, whom he had known during his days as a supplier of piston rings to Nakajima Aircraft Company. In 1949, Honda hired Fujisawa, who oversaw the financial side of the company and helped the firm expand. In 1959, Honda Motorcycles opened its first dealership in the United States.[5][6] As president of the Honda Motor Company, Soichiro Honda turned the company into a billion-dollar multinational that produced the best-selling motorcycles in the world. Honda's engineering and marketing skills resulted in Honda motorcycles outselling Triumph and Harley-Davidson in their respective home markets. Honda remained president until his retirement in 1973, where he stayed on as director and was appointed "supreme advisor" in 1983. His status was such that People magazine placed him on their "25 Most Intriguing People of the Year" list for 1980, dubbing him "the Japanese Henry Ford." In retirement, Honda busied himself with work connected with the Honda Foundation. The card has been autographed on the front by Soichiro Honda......................BOTH CARD AND AUTOGRAPH ARE IN EXCELLENT CONDITION. 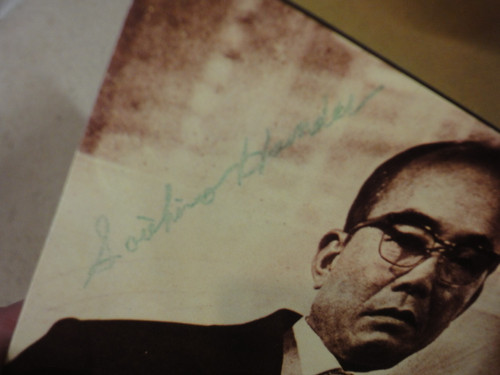