This item is an 8" X 10",color photo of actor Wesley Snipes.Wesley Trent Snipes (born July 31, 1962) is an American actor, film producer, and martial artist, who has starred in numerous films, thrillers, and dramatic feature films. Snipes is known for playing the Marvel Comics character Blade in the Blade film trilogy, among various other high profile roles. Snipes formed a production company, Amen-Ra Films, in 1991 and a subsidiary, Black Dot Media, to develop projects for film and television. Snipes has been training in martial arts since age 12, earning a high ranking 5th dan black belt in Shotokan Karate and 2nd dan black belt in Hapkido. He has also trained as a student of Capoeira under Mestre Jelon Vieira and in a number of other disciplines including kung fu at the USA Shaolin Temple and Brazilian Jiu Jitsu.The color photo has been autographed on the front by Wesley Snipes.........BOTH PHOTO AND AUTOGRAPH ARE IN VERY GOOD CONDITION. 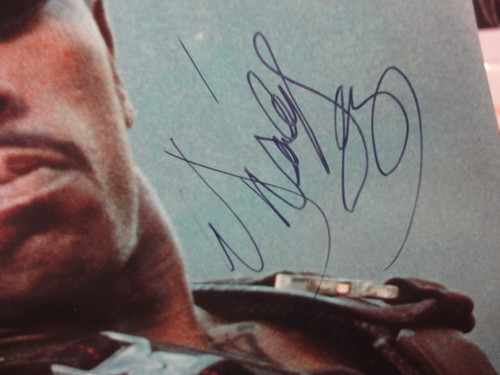