This item is an 8" X 10",color photo of actor Will Smith.Willard Christopher "Will" Smith, Jr. (born September 25, 1968) is an American actor, film producer and rapper. He has enjoyed success in music, television and film. In April of 2007, Newsweek called him the most powerful actor on the planet. Smith has been nominated for four Golden Globe Awards, two Academy Awards, and has won multiple Grammy Awards. In the late eighties, Smith achieved modest fame as a rapper under the name The Fresh Prince. In 1990, though, his celebrity increased dramatically when he starred in the popular television series The Fresh Prince of Bel-Air. The show ran for nearly six years (1990 - 1996) on NBC and has been syndicated consistently on various networks since then. In the mid-nineties, Smith transitioned from television to film, and he ultimately starred in numerous blockbuster films that received broad box office success. In fact, he is the only actor in history to have eight consecutive films gross over $100 million in the domestic box office as well as being the only actor to have eight consecutive films in which he's starred open at the #1 spot in the domestic box office tally.Fourteen of the nineteen fiction films he's acted in have accumulated a worldwide grosses of over $100 million, with four of them taking in over $500 million in global box office receipts. His most financially successful films have been Bad Boys, Bad Boys II, Independence Day, Men in Black, Men in Black II, I, Robot, The Pursuit of Happyness, I Am Legend, Hancock, Wild Wild West, Enemy of the State, Shark Tale, Hitch and Seven Pounds. He also received critical praise for his performances in Ali and Six Degrees of Separation.The color photo has been autographed on the front by Will Smith................BOTH PHOTO AND AUTOGRAPH ARE IN VERY GOOD CONDITION................... 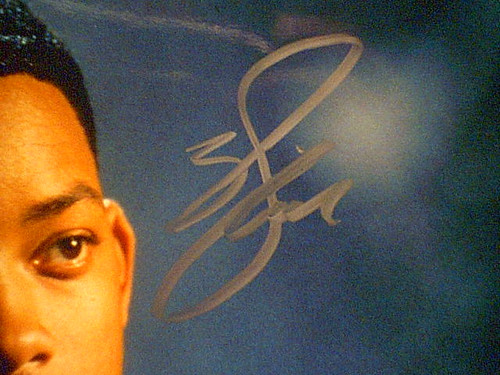