Smothers Brothers(mercury MG 20777)-"Think Ethnic!"-LP. This vintage comedy Lp was released in 1963. Tracks include-Soap,Black is The Colour Of My True Love's Hair,The Fox,Venezuelan Rain dance,Daniel Boone,My Old Man, The WReck Of The Old 49,Santa Calus Is Coming,The Saga Of John Henry,Mary Was Pretty.The brothers' trademark act was performing folk songs (Tommy on acoustic guitar, Dick on string bass), which usually led to fake arguments between the two siblings. Tommy's signature line was, "Mom always liked you best". Tommy (the elder of the two) acted "slow," and Dick acted "superior". In real life Tommy was not slow at all; he handled their business affairs and later gained fame as a yo-yo expert; he starred in his own TV special, The Yo-Yo Man. In the 1960s, the brothers appeared on numerous television shows as guest artists and hosted two series of their own. The first was a situation comedy The Smothers Brothers Show (19651966). Tom played an angel come back to earth to oversee his brother Dick, who played a swinging bachelor. It did not do well in the ratings and had little of the music that was identified with the brothers. Tom would later say "Four Star (the production company) gave me ulcers." The LP has been autographed on the front cover by Tommy Smothers in blue and Dick Smothers in green.........CONDITION OF VINYL,COVER AND AUTOGRAPHS IS VG PLUS................. 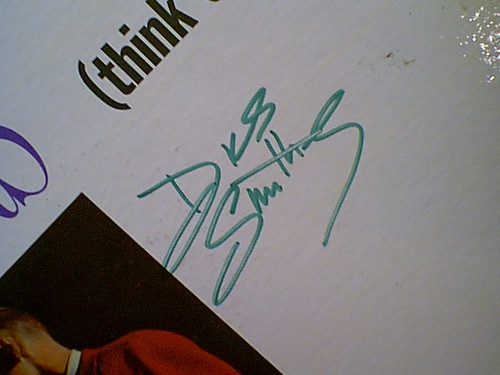