Original Soundtrack-"Hell's Angels '69"(Capitol 303)-LP. This vintage LP features the 1969 motorcycle movie-"Hell's Angels '69". The LP features a gatefold cover with original color photos.Chuck (Tom Stern) and his brother Wes (Jeremy Slate) are the wealthy siblings who plan to rob Caesar's Palace more for fun than profit. They ingratiate themselves to the Hell's Angels of Oakland, lead by Sonny Barger (himself). The brothers plan to use the gang as a diversion during the staging of the planned heist. When Betsy the biker babe (Conny Van Dyke) mistakenly reveals the plan, the brothers are forced to take other measures when they become separated in this boring biker movie that features real Hell's Angels gang members.The LP has been autographed on the front by Jeremy Slate..........................CONDITION OF VINYL IS USED.CONDITIONOF COVER AND AUTOGRAPH IS WEAK VG........... 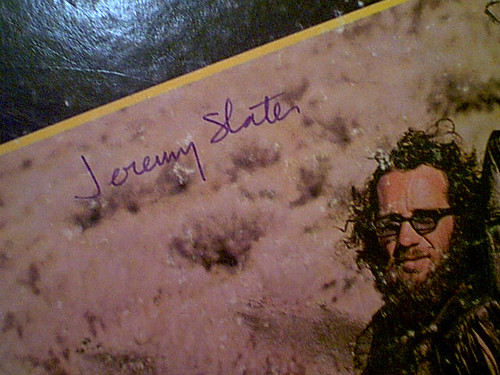