Simpson, Wallis Simpson Windsor "The Woman Who Would Be Queen-A Biography Of The Duchess Of Windsor" 1954 Book Signed Autograph Photos King Edward VIII

Geoffrey Bocca-"The Woman Who Would Be Queen-A Biography Of The Duchess Of Windsor"-1954- Rinehart & Co-5 1/2" X 8 1/2"-217 pages-Hardcover Book-With Jacket-With Photos-Signed By Wallios Windsor..........................Wallis, Duchess of Windsor (born Bessie Wallis Warfield; 19 June 1896  24 April 1986), known as Wallis Simpson, was an American socialite and wife of the Duke of Windsor, the former British king Edward VIII. Their intention to marry and her status as a divorcée caused a constitutional crisis that led to Edward's abdication. Wallis grew up in Baltimore, Maryland. Her father died shortly after her birth and she and her widowed mother were partly supported by their wealthier relatives. Her first marriage, to United States Navy officer Win Spencer, was punctuated by periods of separation and eventually ended in divorce. In 1931, during her second marriage, to Ernest Simpson, she met Edward, then Prince of Wales. Five years later, after Edward's accession as King of the United Kingdom, Wallis divorced her second husband to marry Edward. The King's desire to marry a woman who had two living ex-husbands threatened to cause a constitutional crisis in the United Kingdom and the Dominions, and ultimately led to his abdication in December 1936 to marry "the woman I love". After abdicating, the former king was created Duke of Windsor by his brother and successor, King George VI. Wallis married Edward six months later, after which she was formally known as the Duchess of Windsor, but was not allowed to share her husband's style of "Royal Highness". The book has been autographed on the title page by Wallis Windsor. Please note that the book was signed near the end of her life so there are tremors in the signature..................BOTH BOOK AND AUTOGRAPH ARE IN VERY GOOD CONDITION. 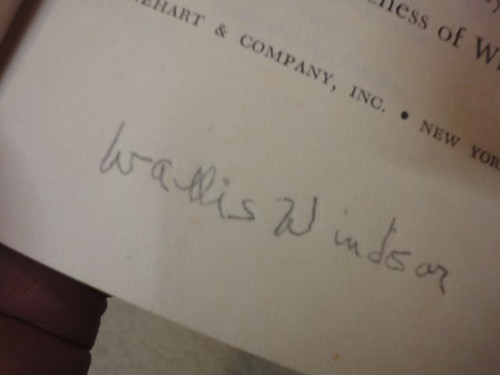 Simpson, Wallis Simpson Windsor "The Woman Who Would Be Queen-A Biography Of The Duchess Of Windsor" 1954 Book Signed Autograph Photos King Edward VIII