This item is a 7 1/2" X 9 1/2",black and white lithograph photo of actress Simone Simon. The lithograph photo was a supplement of The Philadelphia Record Newspaper-Sunday November 8,1936.Born in Bethune, France, Simone Simon grew up in Marseille and went to Paris in 1930. She worked for a time as a designer and model before making her screen debut in 1931 in a comedy by Marc Allegret, who made his own debut as a feature filmmaker that same year. Simon displayed an innocent, girl/woman sensuality that anticipated Brigitte Bardot (ironically, also a discovery of Allegret) by several decades, and it wasn't long before she was discovered by the American movie industry. In 1935 she was signed by Fox studios in Hollywood. However, soon after arriving things began to go wrong for her with an abortive attempt to cast her in Message To Garcia with Wallace Beery, during the filming of which she was hospitalized. Girls' Dormitory (1936) became her first American film, but despite the fact that she enjoyed working on it, she didn't get along with her director. After making a handful of subsequent movies, she returned to France in 1938  but not before she found herself caught in a minor scandal involving her friend, the late composer George Gershwin. It was Jean Renoir who rescued Simon's career, casting her as the beautiful but predatory female lead in La Bete humaine (1938). That film brought her an invitation from director/producer William Dieterle for the role of Belle in The Devil and Daniel Webster. That movie brought her to the attention of producer Val Lewton, who offered her the leading role in the horror B-movie Cat People (1942). The role of the tormented Irena in Cat People proved to be the high point of Simon's film career, embedding her in the memory of millions of viewers, and she briefly reprised the role in Curse of the Cat People. However, none of her other Hollywood roles took, and she soon found herself confined to B-movies. She returned to Europe after World War II and continued making movies, of which the most notable was Max Ophuls' La Ronde (1952).The lithograph photo has been autographed on the front by Simone Simon with a fountain pen in blue..........BOTH PHOTO AND AUTOGRAPH ARE IN VERY GOOD CONDITION............................................. 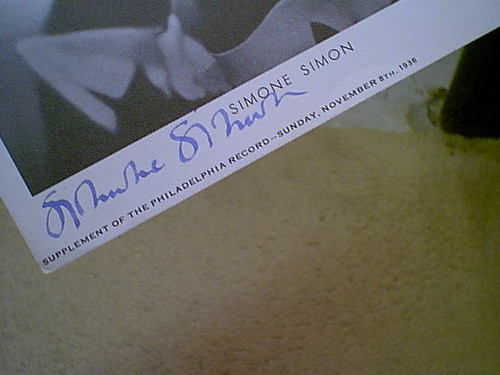