This item is a 10" X 13" color lithograph photo of actor Ron Silver. The color lithograph photo has been mounted on a 10" X 13" piece of photography paper.1976 was a big year for Ron Silver who debuted as a comedian in feature films (Tunnelvision), television (The Mac Davis Show), and theater (El Grande de Coca-Cola). He was also a regular cast member between 1976 and 1978 on the sitcom Rhoda, and then appeared in several made-for-television movies before appearing in Semi-Tough (1977). His feature film career picked up in the early '80s, but he did not get his first big break until he starred opposite Anne Bancroft in Sidney Lumet's Garbo Talks (1984). Silver earned critical acclaim in 1989 for starring in Philip Saville's Fellow Traveler as a Hollywood screenwriter forced to flee his family and friends to avoid getting blacklisted during the early '50s. That same year, Silver won a Tony and a Drama Desk Award for starring in David Mamet's Speed-The-Plow and scored a second film coup in Paul Mazursky's adaptation of author Isaac Bashevis Singer's Enemies, A Love Story. Since then, the busy Silver, who juggled his time between the three entertainment forms, has become a respected mid-range star who can be counted on to deliver consistently strong, fine performances. As the '90s progressed, he moved into more lead roles playing everything from psychopaths (Blue Steel [1990]), senators (Time Cop [1994]), sleazy lawyers (in the TV medical drama Chicago Hope [1994- ]), and scientists (The Arrival [1996]).The photo has been autographed on the front by Ron Silver....BOTH PHOTO AND AUTOGRAPH ARE IN VERY GOOD CONDITION............... 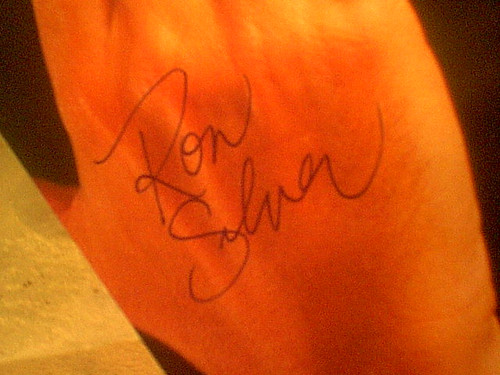