The Sir Douglas Quintet was an American rock band, formed in San Antonio in 1964. With their first hits, they were acclaimed in their home state. When their career was established (subsequent to working with Texas record producer Huey Meaux), the band relocated to the West Coast. Their move coincided with the burgeoning San Francisco psychedelic rock scene of the mid 1960s to early 1970s. Overall, the quintet were exponents of good-times music with strong roots in blues and Texas-regional traditions.Doug Sahm, a veteran of the professional music scene who first sang on radio at the age of five, formed the Quintet (first called simply 'Sir Douglas') in 1964 with longtime friend Augie Meyers and the other original members, Jack Barber, Frank Morin, and Johnny Perez. Sahm had started in country music and had played (at age eleven) on-stage with Hank Williams, Sr. during the latter's final performance. Sahm went on to play in blues clubs in his teenage years and had gained experience as a band leader. The LP has been autographed on the front cover by Doug Sahm............................BOTH RECORD AND AUTOGRAPH ARE IN EXCELLENT CONDITION. 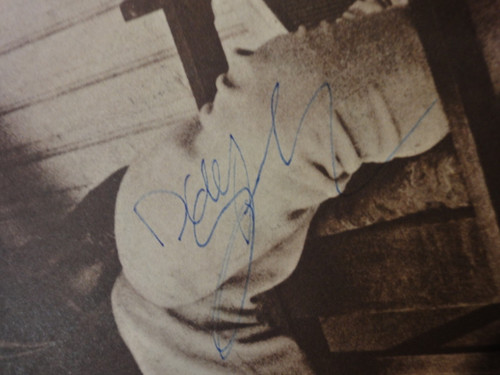