This item is an 8" X 9", color photo of musician Nina Simone.Nina Simone was a classically trained pianist who became a famous nightclub singer thanks to an early hit, 1958's "I Loves You Porgy." A powerful and eclectic talent known as the "High Priestess of Soul," she interpreted and composed classical, jazz, pop, gospel, folk and blues songs of love and bitterness and earned a worldwide following over a 50-year career. A poor black girl from the American south, Nina Simone was enough of a musical prodigy that community patrons financially supported her musical education. She went to the Julliard School of Music in New York and earned a living as a pianist, accompanying singers and playing in nightclubs. She began singing in 1954, and audiences loved her deep voice, raw emotions and soulful interpretations of standards. Simone was a self-described diva of the temperamental genius variety, and she so detested racial injustice in the United States she lived abroad after 1974 (in Barbados, Africa, Switzerland and, finally, France). In the 1990s a surge of popularity created a new generation of Simone fans. Her records made the jazz charts again and she was heard in TV commercials, movies and hip-hop samples. Some of her more well-known songs are: "My Baby Just Cares For Me," "I Put A Spell On You," "To Be Young, Gifted and Black," "See Line Woman," "Sinnerman" and "Mississippi Goddam." A documentary about her life, What Happened, Miss Simone?, was nominated for an Oscar in 2015. The photo has been autographed on the front by Nina Simone in white................BOTH PHOTO AND AUTOGRAPH ARE IN EXCELLENT CONDITION. 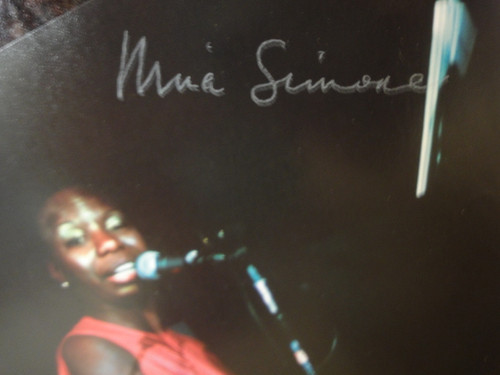