This item is an 8" X 11",black and white early photo of actress Jean Simmons. The lithograph photo has been mounted on an 8" X 11" piece of construction paper.The lithograph photo features Jean Simmons in a movie scene.A luminous beauty, Jean Simmons was a star in her native Britain and in the U.S. who first appeared onscreen at age 14 in Give Us the Moon (1944), but did not become a true star until she played Estella in David Lean's Great Expectations (1946). In 1948, she was handpicked by Laurence Olivier to play the doomed Ophelia in his classic version of Hamlet and won a Best Actress award at the Venice Film Festival and an Academy Award nomination for her efforts. Simmons traveled to Hollywood in 1950 after marrying Stewart Granger. Their marriage lasted a decade and Simmons then became Mrs. Richard Brooks in 1960, the year he starred her in Elmer Gantry. During the '50s and '60s, Simmons had an extremely busy film career appearing in everything from costume epics to romances to musicals to straight dramas. Simmons received an Oscar nomination in 1969 for The Happy Ending. By the mid-'70s, Simmons started working less frequently and divided her time between features and television work. In the late '80s, she had a burst of character roles, but has since made increasingly sporadic forays into acting.The lithograph photo has been autographed on the front by Jean Simmons with a fountain pen in red...............BOTH LITHOGRAPH PHOTO AND AUTOGRAPH ARE IN VERY GOOD CONDITION................ 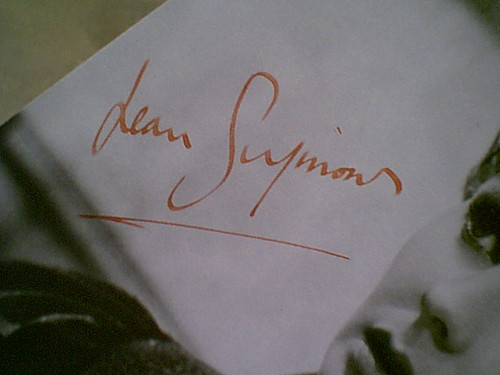