Frank Sinatra-"Love And Marriage"-1955-Barton Music-Sheet Music. Our Town is a 1955 episode of the American series Producers' Showcase directed by Delbert Mann and starring Frank Sinatra as the stage manager and Paul Newman and Eva Marie Saint as the teenagers who fall in love and get married. The episode is a musical adaptation of Thornton Wilder's 1938 play Our Town, with songs by Jimmy van Heusen and Sammy Cahn. It was Sinatra's only performance in a dramatic role specifically for television until Contract on Cherry Street in 1977. The show was praised by television critics, although several writers have questioned Sinatra's suitability for the role of the Stage Manager. Thornton Wilder reportedly disliked the production. The sheet music has been autographed on the front cover by Frank Sinatra with a fountain pen in blue...............BOTH SHEET MUSIC AND AUTOGRAPH ARE IN VERY GOOD CONDITION. 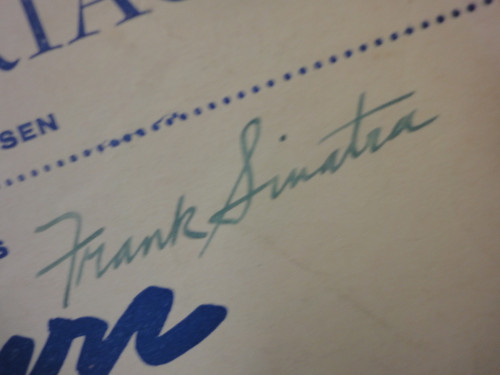