"High Hopes"-1959-Barton Music-sheet music. A Hole in the Head (1959) is a DeLuxe Color comedy film, in CinemaScope, directed by Frank Capra, featuring Frank Sinatra, Edward G. Robinson, Eleanor Parker, Keenan Wynn, Carolyn Jones, Thelma Ritter, Dub Taylor, Ruby Dandridge, Eddie Hodges, and Joi Lansing, and released by United Artists. It was based upon the play of the same name by Arnold Schulman. The film introduced the song "High Hopes" by Sammy Cahn and Jimmy Van Heusen, a Sinatra standard used as a campaign song by John F. Kennedy during the presidential election the following year.Wynn plays a wealthy former friend of Sinatra's character who expresses interest in his plan to build a Disneyland in Florida (the film predates Disney World)until he notices that Sinatra seems too desperate as he cheers for a dog upon which he'd bet heavily. The movie ends with Tony, Eloise and Ally singing "High Hopes" on the beach. Sinatra sings "All My Tomorrows," another Cahn/Van Heusen song, under the opening titles. The sheet music has been autographed on the front by Frank Sinatra with a fountain pen in blue and Edward G. Robinson with a fountain pen in blue...............BOTH SHEET MUSIC AND AUTOGRAPHS ARE IN VERY GOOD CONDITION. 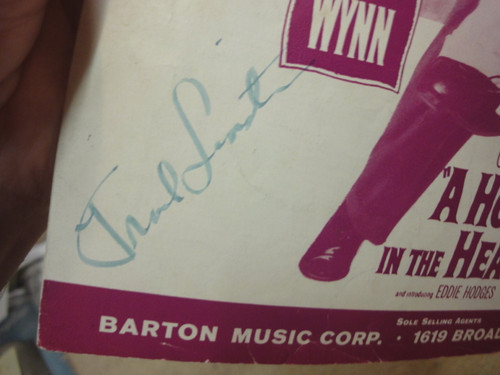