This item is a 5" X 7",black and white photo of Israelli Prime Ministers Yitzhak Shamir and Yitzhak Rabin. The photo was published in a newpaper in 1992. The back of the photo has a stamp which reads-"Copyright Israel Sun Ltd-Tel Aviv Israel". The back of the photo has an original typed byline which explains the photo....Yitzhak Shamir moved to Palestine in 1935 and joined Zionist forces in fighting the British. He was arrested and jailed twice by the British, but escaped both times. After the establishment of the State of Israel, Shamir went to work for national security and during the 1950s held top-level posts in the Mossad. He was elected to the Knesset in 1973, eventually leading the Likud Party and taking over as prime minister after the resignation of Menachem Begin in 1983. After the 1984 elections, Shamir shared power with Shimon Peres of the Labor Party, serving as prime minister until 1992. He retired in 1996....Yitzhak Rabin became chief of staff for the Israeli military in 1964, and directed the armed forces during the Six-Day War of 1967. He succeeded Golda Meir as Prime Minister in 1974, but resigned in 1977. He became the leader of the Labour Party, served as Defense Minister in the late 1980s and was elected Prime Minister in 1992. A proponent of Middle East peace, Rabin shared the 1994 Nobel Peace Prize with Yasser Arafat and Shimon Peres. In 1995 he was shot to death by an Israeli law student who claimed Rabin intended to "give our country to the Arabs." The photo has been autographed on the front by Yitzhak Shamir and Yitzhak Rabin................BOTH PHOTO AND AUTOGRAPHS ARE IN EXCELLENT CONDITION.............. 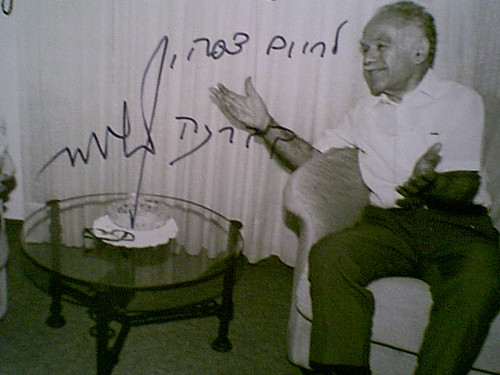