THIS IS AN AUTHENTICALLY AUTOGRAPHED LP BY DICK SHAWN.. DICK SHAWN(20TH CENTURY FOX TFM 3124)SINGS WITH HIS LITTLE PEOPLE. FRONT PHOTO COVER IS SIGNED BY DICK SHAWN. He is the comedian best remembered for his roles as Sylvester Marcus, the bohemian but Oedipal beach-bum son of Mrs. Marcus (Ethel Merman), in Stanley Kramer's It's a Mad, Mad, Mad, Mad World, and as Lorenzo St. DuBois/Adolf Hitler in the musical Springtime for Hitler, the play within the movie, The Producers. He played the DuBois role as a flower power hippie. He is also well known for voicing Snow Miser in The Year Without a Santa Claus. He had continued success with his award winning one-man stage shows, billed as "The 2nd Greatest Entertainer in the Whole Wide World" and his stand-up comedy act that he successfully performed for over 30 years in nightclubs around the world. Although he didn't make many film or TV appearances over the years, Shawn did tour often over the years and periodically performed a one-man show that mixed songs, sketches and even pantomime. Dick Shawn was a frequent speaker at the infamous Friars Club Roasts in Los Angeles and New York. At these events Shawn often pushed the boundaries of taste even within the framework of the tasteless-by-definition roasts themselves. At one of the X-rated "stag roast" that had overdosed on tasteless routines by the previous speakers, Shawn simply walked up to the microphone, took a long pause, and "vomited" pea soup onto himself and one or two of the other speakers sitting at the "Dais". Shawn once said, "I think of my relationship with any audience as a love affair. It lasts only a little while but I always look forward to a happy ending. For both of us." In writing about Dick Shawn's death, New York Post columnist Cindy Adams recounted what the comedian said about trying to find the right audiences for his brand of comedy: "I can't work places like Vegas or the Catskills where people are belching. Maybe I belong in colleges. At least if I die, I die in front of intelligent people who know what I'm talking about." CONDITION OF THE VINYL,COVER, AND AUTOGRAPH IS VG. 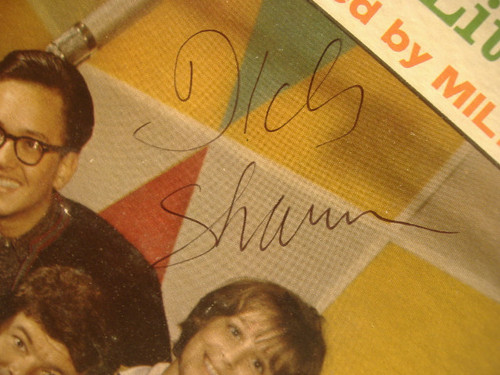