THIS IS AN AUTHENTICALLY AUTOGRAPHED SONGBOOK BY DINAH SHORE AND BING CROSBY... THIS IS A 9 INCH BY 12 INCH SONGBOOK FEATURING PHOTOS AND LYRICS FROM BING CROSBY'S GOING MY WAY AND DINAH SHORE'S BELLE OF THE YUKON-RELEASED IN 1945-PHOTO COVER IS SIGNED BY DINAH SHORE AND BING CROSBY-CONDITION OF THE SONGBOOK AND AUTOGRAPHS IS VERY GOOD. Dinah Shore (born Frances Rose Shore; February 29, 1916 – February 24, 1994) was an American singer, actress, and television personality. She was most popular during the Big Band era of the 1940s and 1950s. After failing singing auditions for the bands of Benny Goodman and both Jimmy Dorsey and his brother Tommy Dorsey, Shore struck out on her own to become the first singer of her era to achieve huge solo success. She enjoyed a long string of over 80 charted popular hits, lasting from 1940 into the late '50s, and after appearing in a handful of films went on to a four-decade career in American television, starring in her own music and variety shows in the '50s and '60s and hosting two talk shows in the '70s. TV Guide magazine ranked her at #16 on their list of the top fifty television stars of all time. Stylistically, Dinah Shore was often compared to two popular singers who followed her in the mid-to-late '40s and early '50s, Doris Day and Patti Page. Harry Lillis "Bing" Crosby (May 3, 1903 – October 14, 1977) was an American popular singer and actor whose career stretched over more than half a century from 1926 until his death. Crosby was a best-selling artist until well into the rock era, with over 100 million records in circulation. One of the first multimedia stars, from 1934 to 1954 Bing Crosby held a nearly unrivaled command of record sales, radio ratings and motion picture grosses.[4] Widely recognized as one of the most popular musical acts in history, Crosby is also credited as being the major inspiration for most of the male singers of the era that followed him, including Frank Sinatra, Perry Como, and Dean Martin. Yank magazine recognized Crosby as the person who had done the most for American G.I. morale during World War II and, during his peak years, around 1948, polls declared him the "most admired man alive," ahead of Jackie Robinson and Pope Pius XII.[5][6] Also during 1948, the Music Digest estimated that Crosby recordings filled more than half of the 80,000 weekly hours allocated to recorded radio music.[6] Crosby exerted an important influence on the development of the postwar recording industry. In 1947, he invested $50,000 in the Ampex company, which developed North America's first commercial reel-to-reel tape recorder, and Crosby became the first performer to pre-record his radio shows and master his commercial recordings on magnetic tape. He gave one of the first Ampex Model 200 recorders to his friend, musician Les Paul, which led directly to Paul's invention of multitrack recording. Along with Frank Sinatra, he was one of the principal backers behind the famous United Western Recorders studio complex in Los Angeles.[7] Through the aegis of recording, Crosby developed the techniques of constructing his broadcast radio programs with the same directorial tools and craftsmanship (editing, retaking, rehearsal, time shifting) that occurred in a theatrical motion picture production. This feat directly led the way to the use of the same techniques in the creation of all radio broadcast programming as well as later television programming. The quality of the recorded programs also led to their assuming a commercial value for sale in and of themselves; which in turn leads directly to the creation of the syndicated market for all short feature media such as TV series episodes. In 1962, Crosby was the first person to receive the Global Achievement Award.[8] He won an Academy Award for Best Actor for his role as Father Chuck O'Malley in the 1944 motion picture Going My Way. Crosby is one of the few people to have three stars on the Hollywood Walk of Fame. 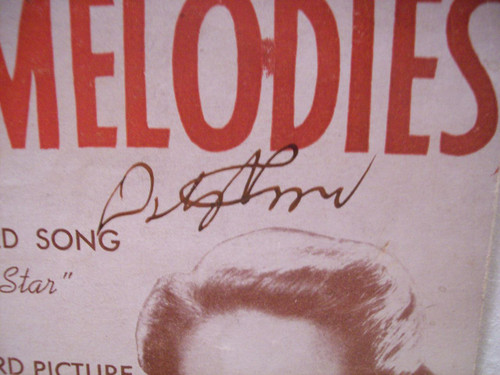