THIS IS AN AUTHENTICALLY AUTOGRAPHED LASERDISC BY CHARLIE SHEEN, VALERIA GOLINO, AND LLOYD BRIDGES... HOT SHOTS-LASERDISC-STEREO EXTENDED PLAY-FOX VIDEO-DIGITAL SOUND-RATED PG13-FOXVIDEO T930 80)RELEASED IN 1991-LP IS STILL SEALED IN ORIGINAL SHRINK WRAP WITH SMALL PIECE REMOVED FROM FRONT PHOTO COVER FOR AUTOGRAPHS BY CHARLIE SHEEN, VALERIA GOLINO, AND LLOYD BRIDGES. CONDITION OF THE AUTOGRAPHS IS EXCELLENT. Hot Shots! is a 1991 comedy spoof which starred Charlie Sheen, Cary Elwes, Valeria Golino, Lloyd Bridges, Jon Cryer, Kevin Dunn, and Bill Irwin. It was directed by Jim Abrahams, co-director of Airplane!, another parody, and was written by Abrahams and Pat Proft. Hot Shots has been described as "Top Gun meets Airplane!". The film begins at Flemner Air Base 20 years ago. A pilot named Leeland "Buzz" Harley loses control of his plane and ejects, leaving his co-pilot Dominic "Mailman" Farnum (Ryan Stiles) to crash alone; although Mailman survives, he is mistaken for a deer owing to the branches stuck to his helmet and is shot by a hunter. Topper Harley (Charlie Sheen) wakes up from a nightmare he has about this event when a Lieutenant Commander (Kevin Dunn) asks him to return to active duty as a pilot in the U.S. Navy. This poses a dilemma for Harley, as he previously left the Navy to live with Native Americans. Harley becomes romantically involved with his therapist, a woman named Ramada (Golino), although she is already involved with another top gun pilot (Elwes). He hates Topper because of the loss of his father to Buzz Harley and believes Topper may do the same to him. Amidst the chaos, the owner of an aerospace firm is trying to sabotage the mission in order to make the current fighter jets look bad in hopes that the Navy will replace them with his German-made jets. However, Topper Harley successfully completes the mission to destroy a nuclear power plant despite his jet's malfunctioning armament. What is perhaps the most iconic scene in the film depicts Middle-Eastern dictator Saddam Hussein, relaxing on a lounge chair beside a swimming pool and sipping a drink in a tall glass through a straw. Suddenly a bomb, nearly one metre in length, falls out of the sky and into his lap, much to his surprise. 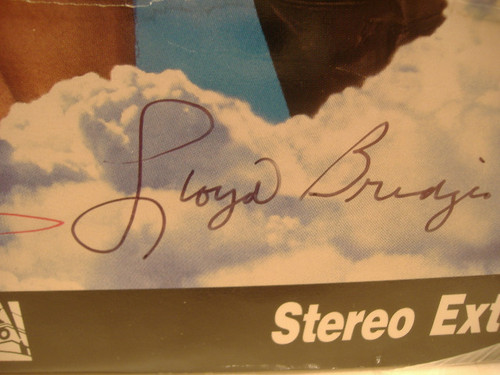