Tom Seaver Signed Autographed First Day Cover April 1981. George Thomas "Tom" Seaver (born November 17, 1944), nicknamed "Tom Terrific" and "The Franchise", is a former Major League Baseball pitcher. He pitched from 1967-1986 for four different teams in his career, but is noted primarily for his time with the New York Mets. During a 20-year career, Seaver compiled 311 wins, 3,640 strikeouts, 61 shutouts and a 2.86 earned run average. In 1992, he was inducted into the National Baseball Hall of Fame by the highest percentage ever recorded (98.84%), and has the only plaque at Cooperstown wearing a New York Mets hat. As of 2010, Tom Seaver and Gil Hodges (played for the Mets in 1962-63) are the only Met players to have their jersey numbers retired by the team (Gil Hodges' number was retired as a manager even though he also played for the Mets). Cover has been autographed on the front by Tom Seaver. Cover and autograph are in very good condition! 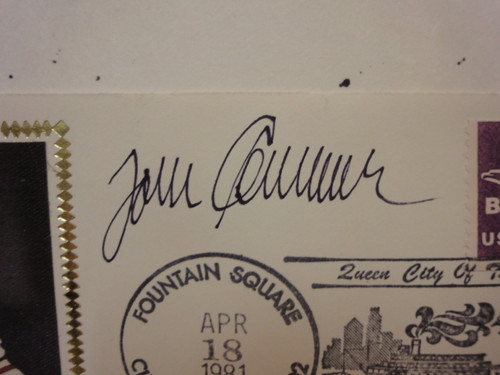