Original Soundtrack-"The Optimists"(Paramount 1015)-LP. This original soundtrack LP features the 1973 Movie-"The Optimists" starring Peter Sellers.Peter Sellers gives a splendid, understated performance in this gentle comedy-drama. Liz (Donna Mullane) and Mark (John Chaffey) are a pair of poor children trying to get by on the streets of London. In their travels, Liz and Mark get to know Sam (Sellers), a one-time music hall performer who these days performs for change with his dog on streetcorners. Sam takes the youngsters under his wing and helps remind them of the simply joys of living that they've forgotten in their hardscrabble lives. Also released as The Optimists of Nine Elms, The Optimists features several original songs by Lionel Bart and an incidental score by George Martin, best known as the man who produced The Beatles' recordings.The LP has been autographed on the front by peter Sellers......CONDITION OF VINYL,COVER AND AUTOGRAPH IS VG PLUS.COVER HAS A SMALL CUT OUT NOTCH ON LEFT SIDE....... 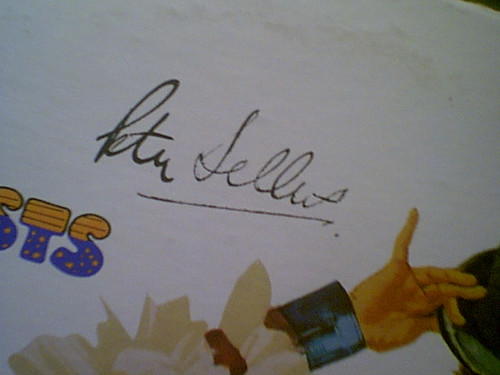