Peter Sellers(Starline 5157-Great Britain)-"The Best Of Sellers"-LP. Tracklist A1 The Trumpet Volunteer A2 Auntie Rotter A3 All The Things You Are A4 We Need The Money B1 I'm So Ashamed B2 Party Political Speech B3 Balham - Gateway To The South B4 Suddenly It's Folk Song Peter Sellers, CBE (born Richard Henry Sellers; 8 September 1925  24 July 1980) was an English film actor, comedian and singer. He performed in the BBC Radio comedy series The Goon Show, featured on a number of hit comic songs and became known to a worldwide audience through his many film characterisations, among them Chief Inspector Clouseau in The Pink Panther series of films. The LP has been autographed on the front cover by Peter Sellers.............CONDITION OF VINYL,COVER AND AUTOGRAPH IS VG. 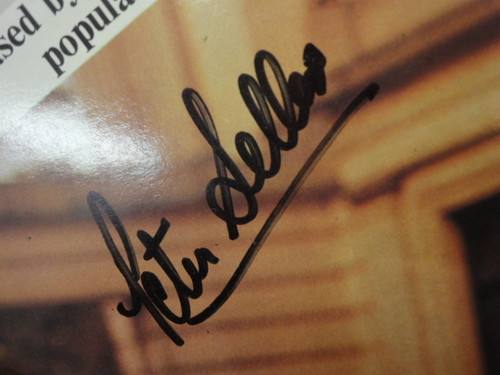