Original Soundtrack-"Fool Britannia"(Ember CEL 902-England)-LP. This vintage import LP features the original soundtrack-"Fool Britannia" starring Peter Sellers,Joan Collins and Anthony Newley.A chameleon of an actor, Sellers played Inspector Clouseau, the bumbling Paris police detective in the long-running Pink Panther film series. Sellers played the character in six films, ranging from The Pink Panther (1964) to Trail of the Pink Panther (1982, assembled from old footage after his death). Sellers was a Royal Air Force entertainer during World War II, then gained public fame on The Goon Show, a Monty Pythonesque radio comedy revue of the 1950s. His film career blossomed in 1964, when he played three roles in the dark 1964 comedy Dr. Strangelove, directed by Stanley Kubrick and co-starring George C. Scott. (Sellers was meek President Merklin Muffley, stiff British Group Captain Lionel Mandrake, and ex-Nazi genius Dr. Strangelove.) Multiple roles became a Sellers signature; he played two or more characters in Lolita (1962), The Prisoner of Zenda (1979) and other films. His penultimate role, as Chance, the gently befuddled gardener in the 1979 film Being There (with Shirley MacLaine), included a famous line about TV: "I like to watch." Despite his long acting career, Sellers never won an Academy Award. He was nominated for acting twice: for Dr. Strangelove and for Being There. The LP has been autographed on the back cover by Peter Sellers,Joan Collins and Anthony Newley........CONDITION OF VINYL,COVER AND AUTOGRAPHS IS VG................... 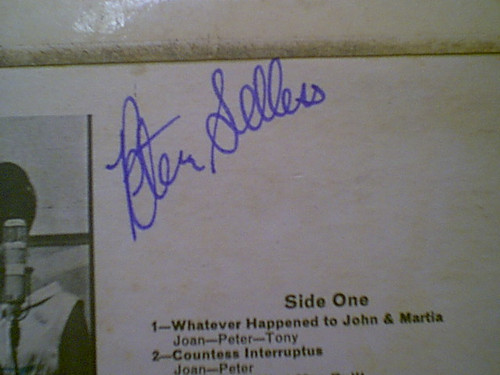