Maurice Sendak-"Chicken Soup With Rice"-1962-Harper Collins-6" X 9"-Hardcover Book-Illustrated-Signed By Author.Maurice Sendak wrote and drew Where the Wild Things Are, a children's book first published in 1963. He grew up in Brooklyn, the child of Polish immigrants, and worked as an illustrator of comics before getting work as an illustrator of other authors' books. After a brief stint as a window decorator for toy store F.A.O. Schwartz, Sendak turned to illustrating children's books full-time. An immediate critical success, his own creation Where the Wild Things Are initially caused some controversy and was not an immediate popular hit. It is the story of Max, a rambunctious boy who is sent to his room without dinner for shouting at his mother, "I'll eat you up!" Concerned adults considered Max a bad role model and thought the drawings were too scary for younger children. Nonetheless, it became popular with children and parents alike over the years, and has since sold millions of copies and been translated into more than a dozen languages. Sendak has written and illustrated several children's books, including In the Night Kitchen (1971) and Outside Over There (1982), illustrated dozens of works by other authors and decorated sets and costumes for stage and television productions of several operas. One of the most respected children's authors in the field, he has been awarded the Caldecott Prize, the Laura Ingalls Wilder Medal and the National Medal of Arts. Sendak was the first recipient of the Astrid Lindgren Memorial Award for Literature (2003).The book has been autographed on the title page by Maurice Sendak...........BOTH BOOK AND AUTOGRAPH ARE IN VERY GOOD CONDITION. 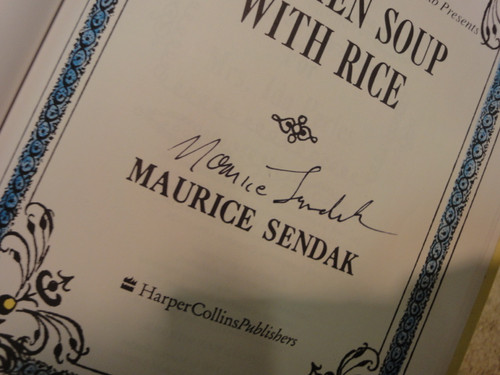