General H. Norman Schwarzkopf-"It Doesn't Take A Hero-The Autobiography"-1992-Bantam-6" X 9"-526 pages-Hardcover Book-With Jacket-With Photos-Signed By Author. A four-star general in the U.S. Army, H. Norman Schwarzkopf was Commander in Chief of the U.S. Central Command during the Persian Gulf War against Saddam Hussein (1990-91). He graduated from West Point in 1956 and spent most of his career in field assignments, including two tours of duty in Vietnam (1965-66 and 1969-70). Norman Schwarzkopf served as deputy commander of U.S. forces in the invasion of Grenada (1983), and he gained international recognition as director of operations Desert Shield and Desert Storm during the Gulf War, leading U.S. and Allied troops to a decisive victory against Iraq. Nicknamed "Stormin' Norman," Schwarzkopf achieved celebrity status for the way he handled himself during his frequent television press conferences. He retired from the Army in 1992 and served at times as a TV commentator on military affairs. His autobiography, It Doesn't Take a Hero, was published in 1992.The book has been autographed on the title page by Norman Schwarzkopf...............BOTH BOOK AND AUTOGRAPH ARE IN VERY GOOD CONDITION. 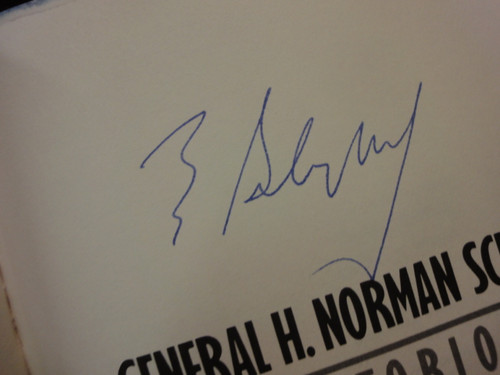