This item is an 8" X 10",black and white photo of actor John Schneider hosting a television special-"Marty Robbins: Super Legend".In order to land the part of Bo Duke in the TV series The Dukes of Hazzard, John Schneider adopted a Cracker dialect and shambling good-ole-boy manner, claiming that he hailed from the tiny  and fictional  community of Snailville, Georgia. In fact, Schneider was born in Upstate New York, and was raised in Atlanta by his mom. During his teen years, Schneider picked up spending money by working as an entertainer at parties and public events, playing the guitar, telling jokes and performing a magic trick or two. He briefly attended the Georgia School of High Performance, hoping to become a race-car driver. His prowess behind the wheel enabled him to land his Dukes of Hazzard job, which he held down from 1979 to 1985, save for a brief 1982 walkout due to contract dispute. Schneider's Hazzard success allowed him to have both a recording career as a country music artist, and an ongoing presence on the small screen. In addition to numerous made-for-TV movies, he had a recurring role on the popular program Dr. Quinn, Medicine Woman. Schneider gained a whole new legion of fans as the Earth father of Superman when he began playing Jonathan Kent on the teen-oriented superhero series Smallville in 2001. He returned to the big screen with a starring role in 2006's Collier & Co., which he also directed.The photo has been autographed on the front by John Schneider...............BOTH PHOTO AND AUTOGRAPH ARE IN EXCELLENT CONDITION................... 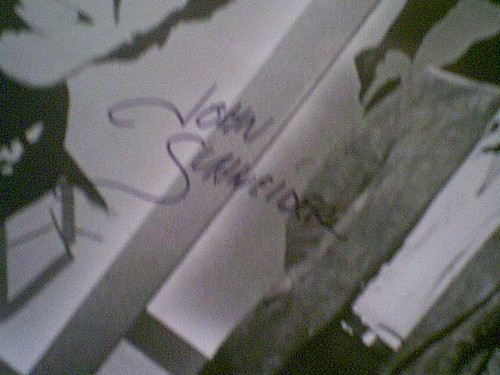