Playbill For The John Golden Theatre-1951-"The Green Bay Tree"-starring Joseph Schildkraut-6" X 9"-32 pages-Theatre program.The son of esteemed actor Rudolph Schildkraut, he trained for the stage under Albert Basserman  his father's rival. Accompanying his father on tour, he went to the U.S. in 1910 and remained till 1913; there he enrolled at the American Academy of Dramatic Arts. Back in Germany, Schildkraut joined his father in the Berlin stage company of Max Reinhardt and quickly rose to stardom. He moved to the U.S. in 1920; within a year he was a major matinee idol on Broadway. Meanwhile, having appeared in a small number of German films, he began playing suave leading men in American silents; by the mid 1930s he had moved into character roles, often villainous. He remained a busy screen actor (between stage roles) until 1948, when he took a decade off from movies; he returned to the screen to reprise his stage role in the film version of The Diary of Anne Frank (1959), following which he appeared in only two more movies. For his portrayal of Captain Dreyfus in The Life of Emile Zola (1937), he won a Best Supporting Actor Oscar. He authored an autobiography, My Father and I (1959). The Playbill has been autographed on the front cover by Joseph Schildkraut with a fountain pen in blue.......BOTH PLAYBILL AND AUTOGRAPH ARE IN VERY GOOD CONDITION...................... 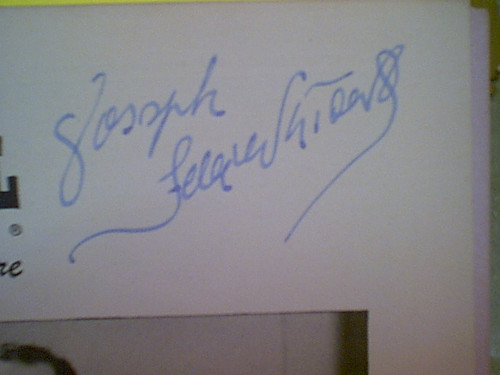