This item is a set of four 6" X 9" one page theatre programs from 1965 which were stapled together. The threatre programs features "Man Of La Mancha".."One By One" written by Dore Schary.."The Family Way' and "Peterpat" starring Joan Hackett.Isidore 'Dore' Schary (August 31, 1905, Newark, New Jersey - July 7, 1980, New York City) was an American motion picture director, writer, and producer, and playwright. Graduate of Central High School, Newark, New Jersey, Class of 1923.Schary had his first success as a writer when a play he wrote, Too Many Heroes, ran on Broadway for 16 performances in the fall of 1937.Schary worked in Hollywood, California and in 1938 won the Academy Award for Best Writing, Original Story as co-writer of the screenplay for Boys Town. He was with RKO Pictures when in 1948 he became chief of production at Metro-Goldwyn-Mayer studios.Schary and studio chief and founder Louis B. Mayer were constantly at odds over philosophy; Mayer favoring splashy, wholesome entertainment and Schary leaning toward what Mayer derided as "message pictures." The glory days of MGM as well as other studios were coming to an end because of United States v. Paramount Pictures, Inc. (1948), a Supreme Court decision that severed the connection between film studios and the theaters that showed their films.In addition, the new phenomenon of television was beginning to take its toll on the big screen. The MGM corporate office in New York decided that Schary might be able to turn the tide. In 1951, Mayer was ousted and Schary installed as president, serving until 1956. MGM swimming star Esther Williams would later state in her 1999 autobiography The Million Dollar Mermaid that Schary was rude, cruel, and as imperious as Mayer had been. She found it appropriate that Schary was fired on Thanksgiving Day, since he was a "turkey." However, on the show This is Your Life, host Ralph Edwards stated that there has never been a show where more stars came out to honor a guest.Following his departure from MGM, he wrote the Broadway play Sunrise at Campobello. The play won five Tony Awards. He wrote and produced the motion picture of the same name in 1960. He also had a brief role in the film, playing a convention delegate from Connecticut.The theatre programs have been autographed on the front cover of "One By One" by Dore Schary with a fountain pen in black and the cover of "Peterpat" by Joan Hackett with a fountain pen in blue..........................BOTH THEATRE PROGRAMS AND AUTOGRAPHS ARE IN AVERAGE CONDITION............... 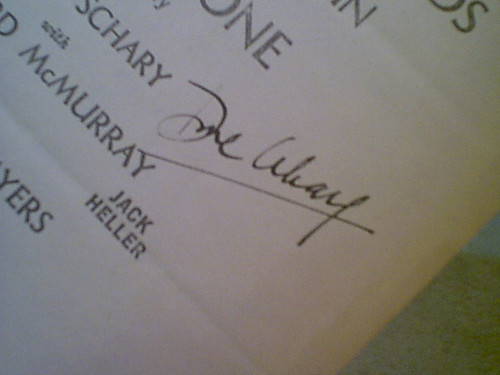