William Saroyan (August 31, 1908 – May 18, 1981) was an Armenian-American novelist, playwright, and short story writer. He was awarded the Pulitzer Prize for Drama in 1940, and in 1943 won the Academy Award for Best Story for the film The Human Comedy. When the studio rejected his original 240-page treatment, he turned it into a novel, The Human Comedy. Saroyan is regarded as one of the greatest writers of the 20th century. Saroyan wrote extensively about the Armenian immigrant life in California. Many of his stories and plays are set in his native Fresno. Some of his best-known works are The Time of Your Life, My Name Is Aram and My Heart's in the Highlands. He has been described in a Dickinson College news release as "one of the most prominent literary figures of the mid-20th century" and by Stephen Fry as "one of the most underrated writers of the [20th] century." Fry suggests that "he takes his place naturally alongside Hemingway, Steinbeck and Faulkner". Kurt Vonnegut has said that Saroyan was "the first and still the greatest of all the American minimalists.” The book has been autographed on the title page by William Saroyan with a fountain pen in blue.................BOTH BOOK AND AUTOGRAPH ARE IN EXCELLENT CONDITION. 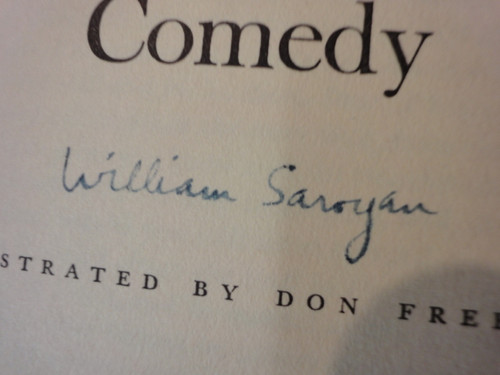