Rafael Sabatini-"Scaramouche"-1923-Grosset & Dunlap-5" X 7 1/2"-390 pages-Hardcover Book-With Illustrations-Signed By Author. This vintage book has been illustrated with scennes from the Photoplay Movies starring Alice Terry,Ramon Novarro and Lewis Stone.Rafael Sabatini (April 29, 1875 - February 13, 1950) was an Italian/British writer of novels of romance and adventure.He is best known for his world-wide bestsellers: * The Sea Hawk (1915), a tale of the Spanish Armada and the pirates of the Barbary Coast; * Scaramouche (1921), a tale of the French Revolution in which a fugitive hides out in a commedia dell'arte troupe and later becomes a fencing master (Sabatini wrote a sequel ten years later); * Captain Blood (1922), in which the title character is admiral of a fleet of pirate ships (Sabatini also wrote two sequels comprised of short stories); and * Bellarion the Fortunate (1926), about a cunning young man who finds himself immersed in the politics of fifteenth-century Italy.The book has been autographed on the title page by Rafael Sabatini with a fountain pen in black...............BOTH BOOK AND AUTOGRAPH ARE IN AVERAGE CONDITION.COVERS HAVE WEAR........ 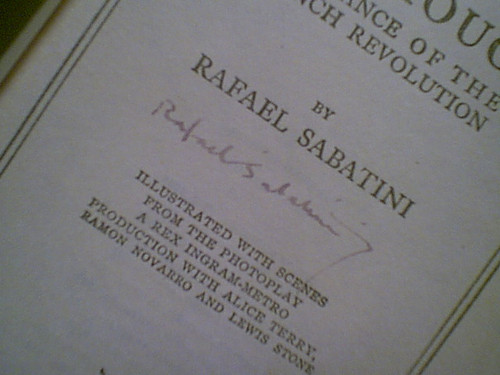