THIS IS AN AUTHENTICALLY AUTOGRAPHED LP BY MORT SAHL.. MORT SAHL(MERCURY MG 21112)ANYWAY...ONWARD. PHOTO COVER IS SIGNED BY MORT SAHL. RELEASED IN 1967. LP HAS BB HOLE IN LOWER RIGHT CORNER. CONDITION OF THE VINYL,COVER, AND AUTOGRAPH IS VG PLUS. Morton Lyon Sahl (born May 11, 1927) is an American comedian and actor. He is credited with pioneering a style of stand-up comedy that paved the way for Lenny Bruce, Nichols and May and Dick Gregory. He also wrote jokes for some speeches given by John F. Kennedy. He is currently a visiting professor at Claremont McKenna College in Claremont, California. Sahl, whose father was an FBI Administrator, was born in Montreal, Quebec, Canada and moved soon there after with his family to Los Angeles, California. As a young man, Sahl joined the ROTC at Belmont High School (Los Angeles, California) and also was on the staff of the school's newspaper, the Belmont Sentinel. Actor Richard Crenna was one of his classmates at Belmont. He served at an Air Force Base in Alaska. After he left the USAF, he graduated from University of Southern California in 1950 with majors in traffic engineering and city management. He began performing stand up comedy at Enrico Banducci's hungry i nightclub in San Francisco, where his audience threw peanuts and pennies at him. His humor was (and remains) based on current events, particularly politics, drawing many of his monologues from the day's newspaper headlines. His trademark was appearing on stage with a newspaper in hand, casually dressed in a pullover sweater. After his friend John F. Kennedy became President, Sahl began to make jokes that were critical of Kennedy's policies. Ed Sullivan refused to let him tell any JFK jokes on The Ed Sullivan Show on national television. As a result, Sahl fell out of the national spotlight for several years. Following Kennedy's assassination in November 1963, Sahl's interest in who was behind it became so great that he became a deputized member of the team that New Orleans District Attorney Jim Garrison created to investigate the assassination. As a result, Sahl's comedy took a back seat to his politics; his act started including readings and commentary on the Warren Commission Report. Between his anti-Kennedy jokes and his onstage tirades against the Warren Commission, he alienated much of his audience. Eventually, he was effectively blacklisted when his shows were cancelled. His income dropped to US$19,000 a year. However, the rising tide of counterculture fueled his comeback. Sahl was married to Playboy Playmate China Lee until their divorce in 1991. They had one son. Sahl wrote a book, "Heartland" in 1976. It is a very bitter account of his rise in comedy, obsession with the JFK assassination, his decline in show business and his long time friendship with Hugh Hefner. During the 1980s, Sahl made many jokes critical of his old friend, Ronald Reagan. Sahl and his wife were invited to visit the White House by Nancy Reagan, where President Reagan awarded and roasted him at a White House gala/tribute in front of most of the other top comedians. Sahl said to television interviewer Charlie Rose of the Reagans, "They are very, very forgiving." In the 1988 presidential election, Sahl was the most prominent supporter of unsuccessful candidate Alexander Haig.[1] His son, Mort Sahl Jr., died March 27, 1996 at the age of 19. Several weeks after his son's funeral, on a flight returning from the East to West coast, Sahl met his 3rd wife Kenslea, who was a Delta Air Lines flight attendant; they married in 1999. Mort is listed #40 on Comedy Central's list of the 100 greatest standup comedians of all time. Sahl, who is Jewish, was recipient of the Fifth Annual Alan King Award in American Jewish Humor (2003) from the National Foundation for Jewish Culture. Woody Allen said, "I adored Mort Sahl," and confided that he would not have performed as a comedian if not for Sahl's revolutionary example, which proved a comedian could succeed with off-hand intellectual material. He compared Sahl's influence to the effect Charlie Parker had on jazz. 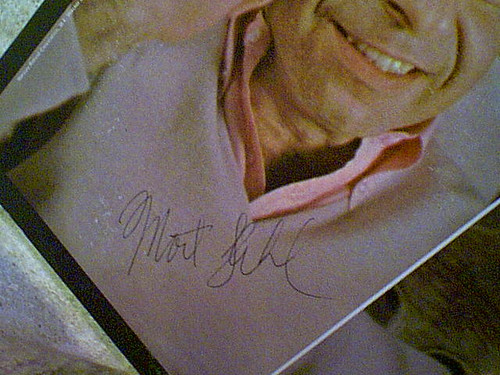