J.D. Salinger "The Catcher In The Rye" 1979 Book Signed Autograph

Salinger, J.D. "The Catcher In The Rye" 1979 Book Signed Autograph

J.D. Salinger-"The Catcher In The Rye"-1979-Little Brown-5" X 8"-277 pages-Softcover Book-Signed By Author.Jerome David Salinger (January 1, 1919  January 27, 2010) was an American writer who is known for his widely-read novel, The Catcher in the Rye. Following his early success publishing short stories and The Catcher in the Rye, Salinger led a very private life for more than a half-century. He published his final original work in 1965 and gave his last interview in 1980.In 1951, his novel The Catcher in the Rye was an immediate popular success. His depiction of adolescent alienation and loss of innocence in the protagonist Holden Caulfield was influential, especially among adolescent readers.The novel remains widely read and controversial,selling around 250,000 copies a year.A hand signed cut signature by J.D. Salinger with a fountain pen in black has been affixed to the title page of the book. The cut signature portion is approximately 1" X 3".........BOTH BOOK AND AUTOGRAPH ARE IN VERY GOOD CONDITION. 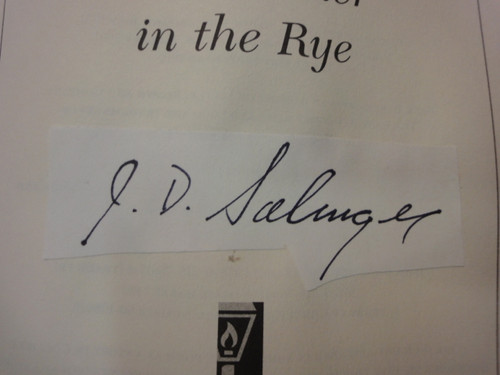 Salinger, J.D. "The Catcher In The Rye" 1979 Book Signed Autograph