Carl Sandburg(Saturday Review Originals SR 1-"A Lincoln Preface"-LP. Released in 1955-this LP features Carl Sandburg reading from his works-A Biography Of Lincoln-"A Lincoln Preface"...."Lincoln Speaks At Gettysburg" and The Lincoln Passage from "The People Yes" (a poem).Carl August Sandburg (January 6, 1878  July 22, 1967) was an American poet, historian, novelist, balladeer, and folklorist. He was born in Galesburg, Illinois of Swedish parents and died at his home, named Connemara, in Flat Rock, North Carolina. H. L. Mencken called Carl Sandburg "indubitably an American in every pulse-beat." He was a successful journalist, poet, historian, biographer, and autobiographer. During the course of his career, Sandburg won two Pulitzer Prizes, one for his biography of Abraham Lincoln (Abraham Lincoln: The War Years) and one for his collection The Complete Poems of Carl Sandburg. The LP has been autographed on the back cover by Carl Sandburg in black fountain pen..................CONDITION OF VINYL,COVER AND AUTOGRAPH IS VG.................... 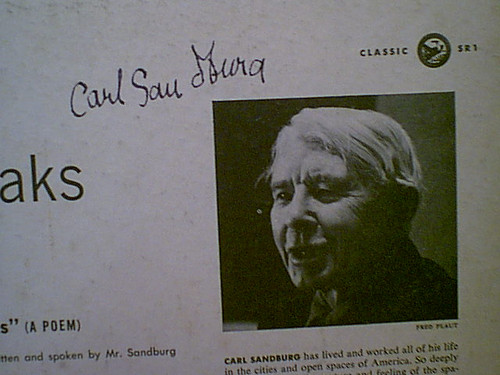