"Song Hits" Magazine-August 1961-33 pages. This vintage Song Hits Magazine-which originally sold for twenty five cents-features a cover photo of Bobby Rydell. The magazine also features a four page article with vintage photos of Bobby Rydell.One of the most sought-after nightclub and concert acts in the country, Bobby Rydell's interest in show business began at the ripe age of four. His performance in Bye Bye Birdie and his recordings "Wild One" and "Volare" made him a famous show business performer of the '60s. Rydell used his talents as an impersonator and drummer mostly in pursuing a musical career rather than an acting career. After making his first hit recording, he pursued a solo career, performing at the Copacabana in New York in 1961, where he was an instant hit. Rydell made his acting debut in 1962 on the television show Combat! One year later, he starred as Hugh Peabody in the famous musical Bye Bye Birdie. It was only after his acting debut that he fervently began playing the nightclub circuit. With records like We Got Love, Wildwood Days and Sway, Rydell made himself a hit. Along with Frankie Avalon and Fabian, Bobby Rydell is known as a Philadelphia-born teen idol, known not only for his musical genius but also his handsome looks.The Song Hits magazine has been autographed on the front cover by Bobby Rydell with a fountain pen in black...........BOTH MAGAZINE AND AUTOGRAPH ARE IN USED CONDITION.SOME ITEMS HAVE BEEN CUT OUT OF THE INSIDE PAGES............. 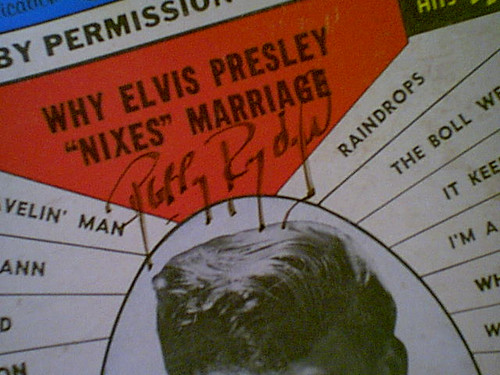